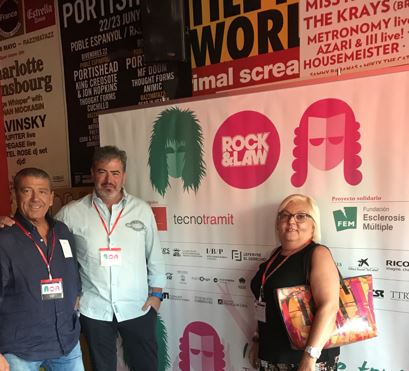 June 2017. Rock & Law. Rock & Law is an initiative that started in 2009 and was set up by a number of law offices in Lisbon in order to organize a charity concert where bands made up of members of each office would play to show solidarity. It was a success and since then they have played every year in the Portuguese capital. We discovered that lawyers, as well as being serious and very formal characters, are also people with a huge spirit of solidarity and are great performers on stage. The event enjoys the participation of major domestic and international law firms. Given its success, it has continued ever since.

In 2010, the idea was exported to Spain, with the first show taking place in Madrid. In 2017 there was a concert at the Razzmatazz Hall where TECNOTRAMIT was heavily involved, given that it was one of the event’s main sponsors. All proceeds from the event went to the Multiple Sclerosis Foundation and their Neuro-rehabilitation Centre project.

The concert was attended by several of our CEOs, as well as by our Managing Director, Miguel Argelich, and all enjoyed a night full of solidarity.